A short story of fun…

“Song for the Basilisk,” Ted read, peering at the paperback in his hand.

He glanced up at Amita. “What do you think this is about? Aren’t basilisks snakes? They don’t sing.”

“It says ‘Song for the Basilisk, not ‘by the Basilisk’,” Amita said, raising her eyes from the book in her own hand. “Read the blurb on the back. Maybe it’s your kinda thing.”

She brushed a strand of black hair from her cheek before reclaiming her entrancing gaze to study words, instead of studying him.

He squinted down at her book. Something about alternate realities, or maybe quantum mechanics—one of those incomprehensible topics she loved. Or at least said she loved. Maybe she just read those books to look smart.

Ted sighed. She was smart, though. Really brainy. Way too clever for him.

He flipped over Song for the Basilisk, eyes running over the story synopsis, but not really taking in the words. What would it be like to actually see a basilisk? Not face to face, of course, because then you’d be turned into stone. Or was it salt? Anyway, something not good. But how about with a mirror, like Hermine did in Harry Potter? He’d loved that series. Even book number five, when Harry turned whiny and hormonal.

Amita raised her head and let her own book fall closed, though she slipped her finger between the pages to keep her place.

Ted looked up and his thoughts scattered as he gazed into her eyes. Disney-princess Bambi eyes. Big, brown, with long, curved lashes. Beyoncé eyes. He’d always loved Beyoncé’s song, Single Ladies—couldn’t get it out of his head for a week once he’d heard it. Was Amita single?

“I dunno,” he said, his cheeks burning. He shoved the book back on the shelf and wandered away down the aisle. “I’m just going to look over here.”

He glanced back at her and caught her shrug. She lowered her gaze again, choosing micro-particles and multi-verses over him. Clearly she wasn’t going to pay him any more attention. He’d thought if he went to a bookstore with her after class, she’d be impressed. Wanna hang out with him. Stupid idea. Stupid, just like him.

He scuffed his way through the mysteries and down another aisle toward the coffee shop in the corner of the store. At least he could get a double-shot latte and a cookie while he was here. Not a total bust of an afternoon.

On his way through the mythology section, his eye was caught by a shining cover with a photograph of an ancient painting. He peered closer. A black snake with the head of a rooster was destroying trees with, what looked like, its breath.

History of the Basilisk, the title read. 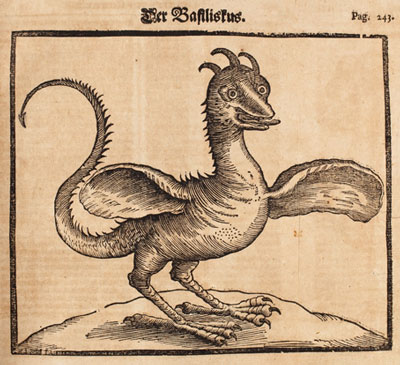 “Huh,” he said, reaching for the book. He studied the creature. Its cock’s head was arched up with an open beak and glaring eye, and its body was a massive, scaled snake. But it ended as it had began, as a rooster, with sharp talons on bird’s feet.

He carried the book with him to the coffee shop, flipping through the pages and scanning the strange depictions of various basilisk creatures, also called a Regulus, Baselicoc, Basiliscus, Cocatrix, Cockatrice, Kokatris, or Sibilus, depending, apparently, on the country in which it was described, or maybe the snake to chicken ratio.

He was still turning pages, eyes glued to the bright photos of sculptures, paintings, tapestries and coats of arms, when the barista spoke.

“Iss there ssomething I can get for you?”

“Mmm,” Ted mumbled, closing the book but keeping a finger between the pages to save his place. He looked up, and found himself face to face with a scaly, feathered, clawed creature, its head cocked to one side, a smile on its beak. Its eyes were covered by dark sunglasses and it wore a name tag on its green apron that said, Hello, my name is Bob.

“Wha…” Ted said, his mouth forgetting how to shape words.

“Um,” Ted managed. He darted looks around the shop. No one else seemed disturbed by the basilisk barista. They sipped their various drinks and perused the books they’d pulled from the nearby shelves, unfazed.

The basilisk shifted behind the counter. Its sinuous body slid across the tile floor with the barest whisper of sound, but its talons ticked an impatient staccato.

Ted gulped, then nodded dumbly. He stared in fascinated horror as the creature used its stubby wings and rooster’s beak to wrangle a taste of smoothie into a tiny, plastic cup. It plunked the drink down on the counter with its beak, then gestured at the sample with its wing.

Ted lifted the cup in shaking fingers and took a sip. It was refreshing. Sweet, but not cloying. Cold and totally full of berry flavor.

“Nice! Who does that anymore?” Ted peered at the menu-board. “I’ll have a ‘massive’, please. With whipped cream.”

“Of coursse,” Bob hissed, ringing the order up on the till with its beak. “That will be ssix dollars.”

The basilisk took Ted’s money with one clawed foot, holding its wings out to balance.

“One Mass-Straw, with whip,” Bob called out to its sunglass-wearing co-worker who was lounging near the Vitamix machines.

Ted studied the other beast as it began to make his smoothie. Maybe this one was a cockatrice…more chicken in it than snake. Probably that’s why it got the job mixing; its body could balance better and its wings were a bit larger.

As Ted watched, the creature grabbed the lid to the Vitamix with its snake’s tail and pushed it onto the machine before snatching up the tamper with one clawed foot and switching on the blender with its beak.

“Uh, Bob?” Ted said, turning his attention back to the creature at the counter. “Can I ask you a question?”

“Oh, I get that a lot,” Bob said, flapping its wing as though shooing away a fly. Actually, it was shooing away some sort of insect. The bug buzzed past Ted’s ear and away into the bookstore. “I’m a Bassilcock, actually. But we’re very ssimilar to bassiliskss—ssort of like Australianss and New Zealanderss.”

Ted rubbed the back of his neck and stared at the cookies in the pastry case instead of the basilcock.

“So, if you looked at me without your sunglasses, you’d turn me to stone?” he said, his voice squeaking on the last word.

Bob’s beak dropped open for a minute, then it began to laugh, a slithering, hissing giggle that made Ted’s skin crawl.

“Good heavenss, no! That’ss a good one!” It wiped a tear off its cheek with the tip of its feathered wing before turning to its co-worker. The cockatrice, or maybe it was a cocatrix, was just pouring Ted’s smoothie into an enormous plastic cup and struggling to get the lid on.

“Hey Juliuss,” Bob called out. “He thought I’d turn him to sstone if I look at him!”

Julius turned to stare at Ted, a straw clutched in its talons. “What? Like that crazzy Greek myth about the lady with ssnakes on her head? What wass her name?”

“Ya!” Bob said, “Totally like Medussa.” It opened its beak and let out another scraping laugh before turning back to Ted and shaking its head so that its red comb wobbled from side to side.

“Whew. Thankss for the laugh, man. I needed that.”

Ted, his cheeks burning in embarrassment for the second time that afternoon, shuffled his feet and rubbed his neck again.

He tried to look casual. He stuffed his hands in the pockets of his cargo pants and glanced between Bob and the snickerdoodles. He hated to be rude, but couldn’t bring himself to let the matter go.

“Right, you don’t turn people to stone,” he finally said with a forced laugh. He paused, flicking his gaze back to Bob. “So, why are you wearing sunglasses inside? Are you sensitive to fluorescent lights? My aunt used to get migraines from fluorescent lights.”

The basilcock shook its head and brushed at the lenses with its feathers. “No, I don’t have problemss with the lightss. It’ss becausse I’d kill you dead in a nanossecond if I looked at you. And that,” it continued, flourishing a wing, “iss not good customer ssservice.”

Julius stumped over to the counter on its squat chicken legs, its snake tail curled around the smoothie.

“Here ya go, buddy,” it said, sliding the drink across the counter. “Enjoy!”

Ted, keeping his eyes safely on his beverage, mumbled his thanks and turned away from the basilcock and cockatrix. He nearly bumped into Amita who was standing behind him, her nose still buried in her book.

She glanced up, then focused on the smoothie in Ted’s hand. She smiled, a wide white grin in her gorgeous brown face.

“How did you know strawberry was my favorite?” she asked. 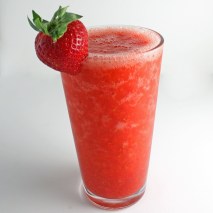 Ted handed her the drink and watched, transfixed, as she caressed the straw with her lips. Lips like cut figs. Well, really they probably weren’t like cut figs; he’d just read that phrase somewhere and thought it sounded romantic. The only experience he’d ever had with figs was in those ‘cookies’ with fig filling which were pretty much inedible pieces of cardboard with some nasty brown goo in the middle.

“What did you find to read?” she asked, glancing down at his book as they strolled over to a table.

He held up the mythology book. He didn’t bother to speak. Better that he keep his mouth shut so she’d keep on talking to him.

“Oh, I love mythology,” she said as she read the inside jacket. “And the basilisk is a really cool creature. I mean, who came up with the idea of putting a snake together with a rooster and giving it the power to kill with one look? So weird.”

She set her own book on the table, pulling her finger free from between the pages so that she could flip through the mythology book.

Ted dragged his eyes from her face to glance down at the cover.

Quantum Theory in the Wormhole: how consciousness can create alternate realities.

He swiveled around in chair to stare at the baristas. The basilcock nodded at him, gestured toward Amita, and then gave Ted what looked like a double thumbs up. It was hard to tell though, what with the feathers instead of thumbs. But Ted grinned at him anyway and returned the gesture.

Ted turned back to Amita. “Mind if I take a look at your book?” he asked.

She lifted her head and caught him in her magical gaze. “You like that kind of stuff? I didn’t know.”

He could barely breath as she smiled at him. Not just a friendly smile. An interested smile.